To those who are unfamiliar with the term "Ham Radio", it means Amateur Radio.

Since the early 20th century, the FCC has set aside swaths of frequency for “Hams” to chat with others of similar interests - world wide. A technical license is required but no longer proficiency in morse code. Still, You should know in this digital age, the Ham Radio itself is a bit more technical to use than the Tuning Dial radios of the Vacuum Tube era. And you'll have to be in a location where one can erect an antenna for longdistance use, which is a subject unto itself.

A Great Video is Here; Getting Started As A Ham Radio Operator.

When using voice, the method of modulation of the radio waves was primarily AM, FM and for very long distance, Single SideBand (SSB). In recent times you can add to those digital and digital fusion. The latter is when the radio waves are received at a local repeater and routed to a chosen country via the “internet” and then back to radio waves - say NY to Tahiti. It is less weather dependent and with hardly any interference and that’s the big plus to this method. But from my perspective, you have once again surrendered your soul to the internet. And “they”, can know who you are, and where you are. Using a radio transceiver like the one shown here - a YAESU FT991, both receiver and transmitter are in one unit. It covers all the frequencies allowed. The transmit power is 100 watts and with the proper antenna can transmit in the traditional way - person to person globally. And if push comes to shove you might overlook using your call letters amongst the folks you choose to communicate with in anonymity. I’m sure you get the point. The radio works with digital fusion too if one dares and that’s assuming the internet is up. Importantly it allows one to be mobile, so your signal is difficult to track and operates on 12VDC, in your car (or boat).

Have you thought about what you would use for communications if there was a regional or national power failure. Cell phoned might work for as long as your iPhone was charged, and assuming the cell towers had power. A non ham radio for local communications you might want to consider is the below. (Cobra MR HH450 Dual band) It uses AA Batteries or it's chargeable batter pack which can be charged using your cars cigarette lighter.

Another Brand that makes an assortment of Ham and Marine Radios is ICOM. 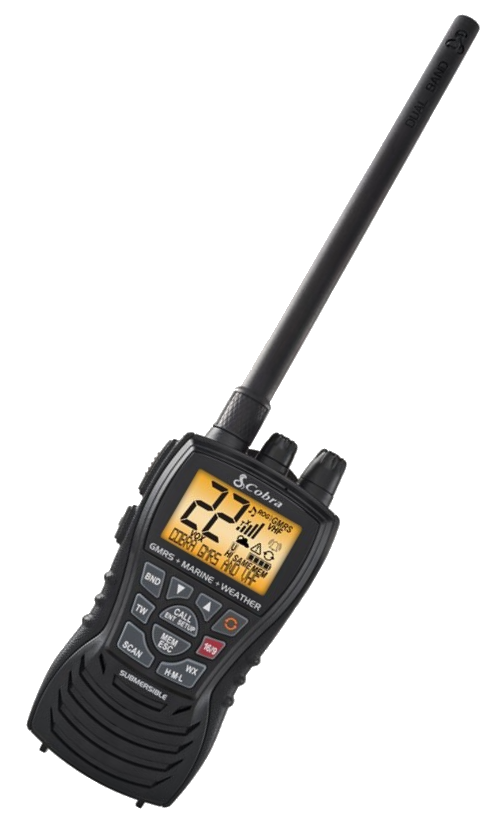